Bonjour and good morning! The Regiment is on its sixth day of tour, and we are in Stanford, California!

On Wednesday, we rehearsed in Salt Lake City, Utah, at Bingham High School. We were very thankful for this rehearsal facility; there was plenty of field space, an amazing turf stadium, great air conditioning, and a beautiful view! 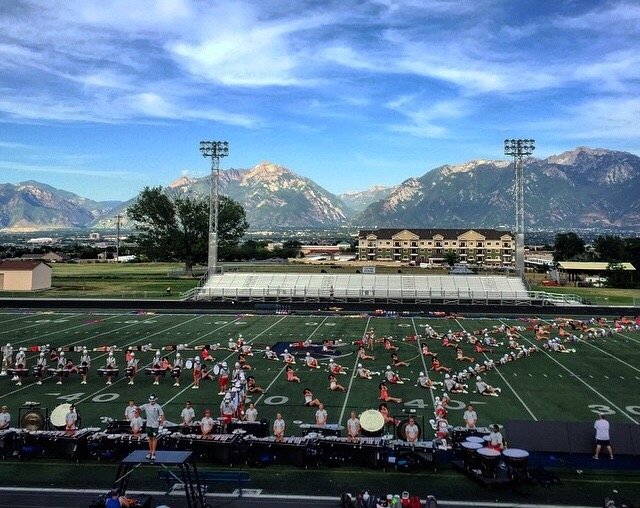 The color guard spent the majority of the day in sectionals, focusing on repping larger chunks of the show to build stamina. The night before, we had a journaling session on the bus, at the end of which we all shared our goals and thoughts on the microphone. As a result, we had an amazing day, and I hope that will carry forward into the rest of the season.
That day, we had a longer afternoon block, with snack in the middle, during which the color guard and tubas were treated to some Gatorade from Victor, an alum who lives in the area. Merci beaucoup, Victor! 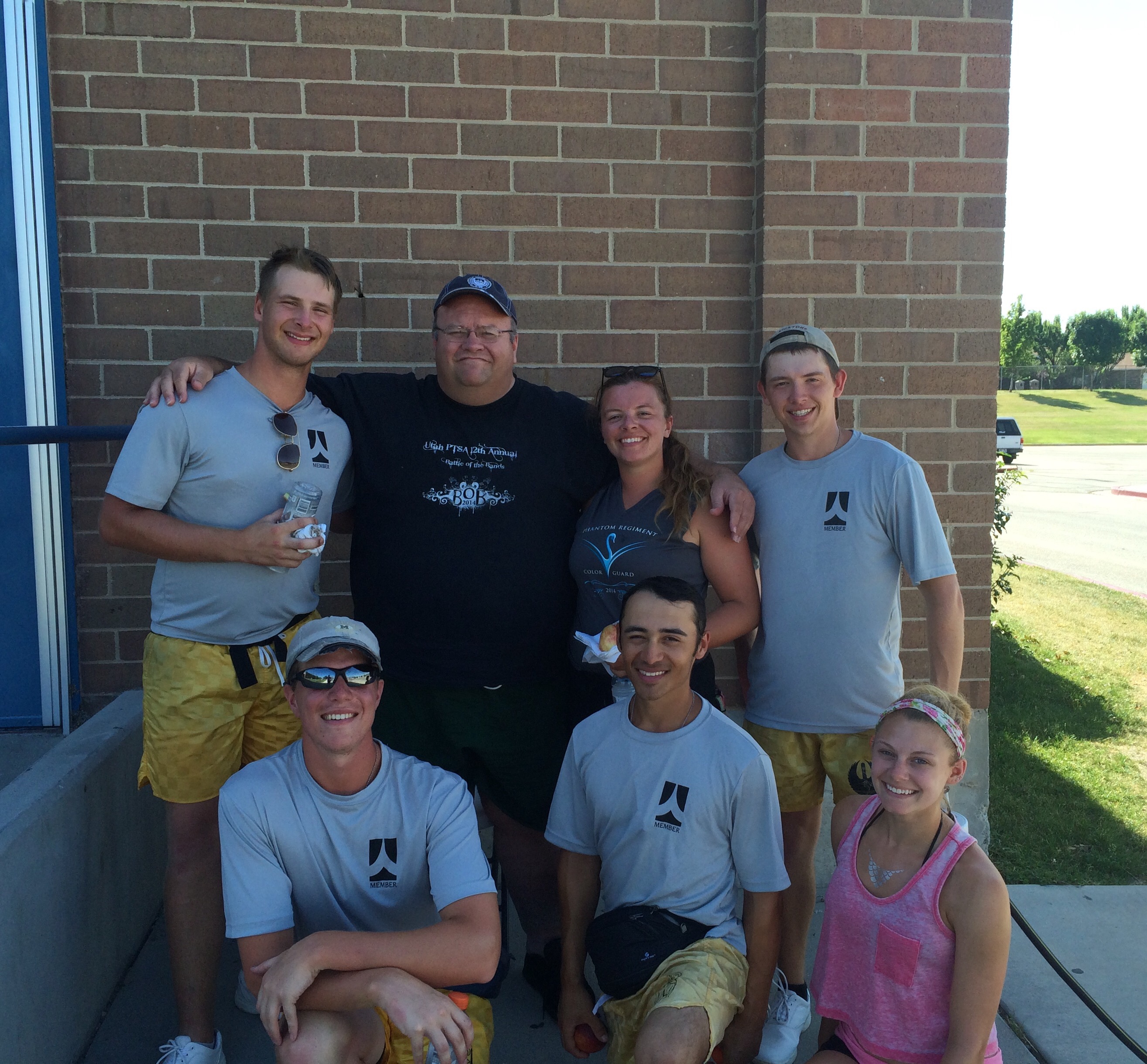 On Thursday the corps rehearsed at Damonte Ranch High School in Reno, Nevada, where we put on a clinic with their marching band. It was very fun to meet all of the students and interact with them all day. (Go mustangs!) I have a theory that all marching band folks are silly, regardless of age or location.

That evening, we had our ensemble block in full uniform. We focused on repetitions of large chunks of the show to ensure that the corps was focusing on holistic, energetic, and sustained performance. The Regiment was battling 40 mph winds all day, which was especially tough for the color guard, but we stayed positive and continued to fight all day long until the last count of the run through. 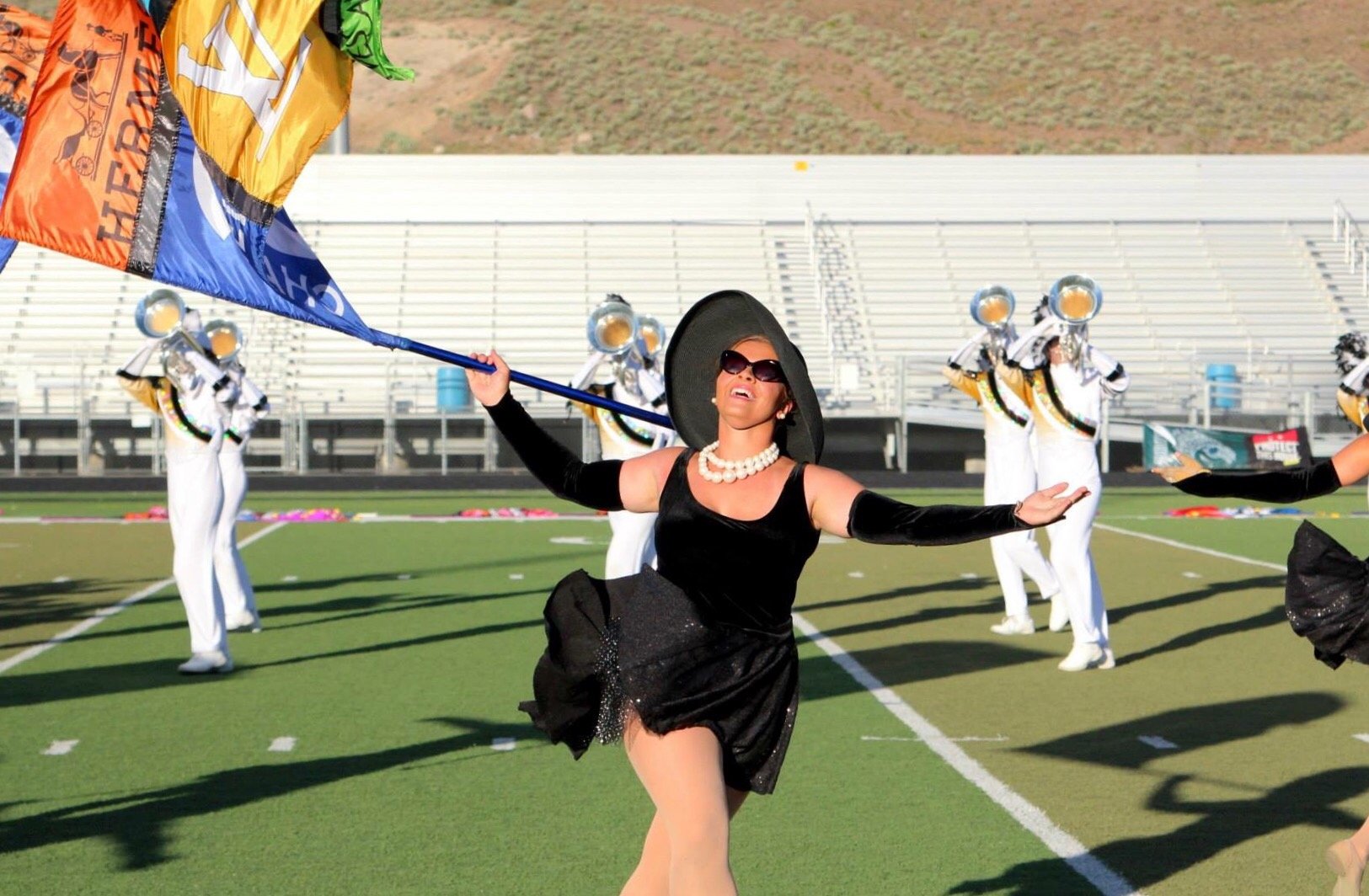 Yesterday we had our first show in Clovis, California! We stayed at Clovis West High School, and had a very short rehearsal day before getting ready for the show. It was the hottest day of the summer, with a high of about 104 degrees in the afternoon, but all I could think about was how there was no wind to fight against! It felt good after the gusty day we had in Reno.

The Phantomettes had a very energetic warm up, and as a result, had an amazing show. This is my fifth season of DCI, and I can honestly say that this was my best first performance. It was so focused, and calm, and fun! After the show, it was clear that the entire drum corps had an amazing run as well. There is something so special about knowing that everyone brought the same energy and attention, and I can’t help but dream about what that means for the rest of the season.

Today we are rehearsing at Independence High School in San Jose, California before traveling to perform at the Stanford Stadium. If you are in the area, you are more than welcome to attend our ensemble block, which begins at 2:30.

QUOTE OF THE DAY(S):

“The wild horses are having a kiki!” “I named that one Bianca, I’m performing for her!”

Be careful in the wind!

California is so beautiful!

Salut! The Phantom Regiment is officially on tour! Today we had a very productive rehearsal day in Fremont, Nebraska, and are on our way to our next stop in Laramie, Wyoming. It’s hard to believe that spring training is over; it really flew by this year! We are very excited to be bringing our program to the West coast for the first time since 2012.

There has been so much excitement and hard work the past week, between filling and detailing our closer and cleaning other sections of the show more closely, the Phantomettes have been very busy! We were very bummed that our Dress Rehearsal show was rained out, but soon we will be at our first competition. 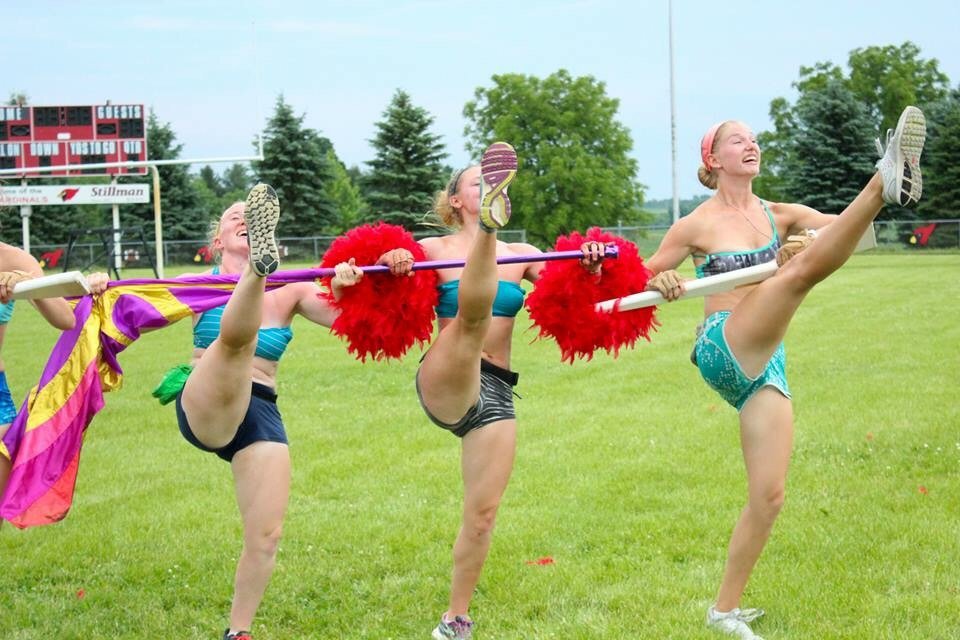 Today, we had rehearsal until the evening, and the whole corps made adjustments to the existing program to spruce it up a bit. The focus was on improving scenes one and three.

During morning block, the color guard  was treated to a full dance block, which felt amazing because we all had bus body this morning. If you are not familiar with this term, ‘bus body’ is what results from the creative sleeping positions we use on the bus at night.

Afternoon block was longer than normal, so it was challenging to keep the energy up, but we worked together and pushed through.

SHOUT-OUT: The amazing sewing ladies for making us all look amazing! We have the best volunteers.

QUOTE OF THE DAY: “You forgot the pickles!”

Thanks for reading! À la prochaine! 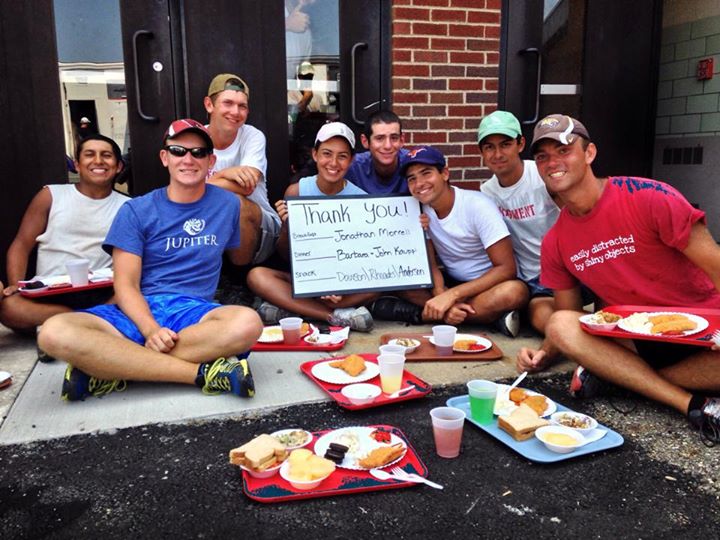 It takes a tremendous amount of energy for a member of The Phantom Regiment to get through a day on tour. Grueling rehearsals in the sun, exhausting performances under stadium lights, even the work required to keep the corps moving day-to-day requires the expenditure of 6,000 calories per day from each of our members!

Here’s your chance to help fuel the Regiment by sponsoring a meal! Anybody who sponsors a meal will have their name written on the schedule that day, so that members, staff and volunteers have the opportunity to recognize and thank our supporters. You’ll also be invited to enjoy your meal with the corps, if you can be there!

For more information on being a part of the team Fueling the Phantom Regiment, simply click on the logo below. Remember, donations are tax-deductible! 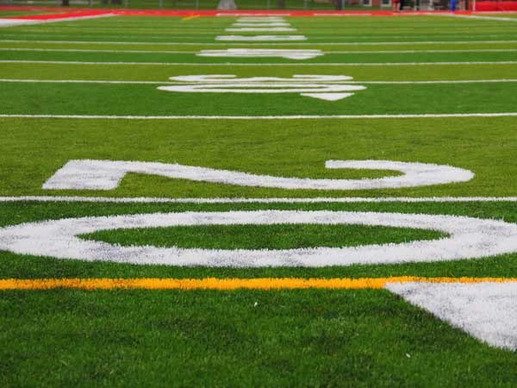 The Phantom Regiment invites you to attend our annual “Dress Rehearsal” this Saturday, June 13, 8:30pm at Stillman Valley High School:

The performance will begin promptly at 8:30pm, but the gates and souvenir stand will open at 7pm. You can stock up on all your 2015 Phantom Regiment gear!

This event is FREE and open to the public, but donations will be accepted and greatly appreciated.

This performance is normally Sunday night, so don’t forget to come see it Saturday night instead. The Regiment will rehearse one more day at Stillman on Sunday before heading West for the start of our summer tour.