In celebration of 60 years of great drum corps in Rockford, we are bringing you into the lives of the members of Phantom Regiment, highlighting alumni from every decade. This month, we are focusing on a few colorguard members who might not fit the “traditional” Phantomette mold….

Give us a quick run down of your life outside of drum corps:  I graduated from the University of Illinois at Urbana-Champaign in 2010, with a B.S. in Materials Science & Engineering. I am currently a Project Manager. My significant other and I met at Phantom Regiment in 2007. 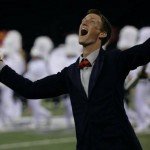 Michael filled a spot at the last minute in 2009’s show, “The Red Violin.”

situation in life isn’t the most ideal. If I can overcome the extreme physical and emotional demands of a summer of drum corps, then I think I’ve got the fortitude to achieve almost anything I want in “normal” life. Second, I learned an extreme appreciation and tolerance for everyone at Regiment. During my first summer of drum corps, I was exposed to so many types of people that I never encountered in my hometown. I matured and gained an expanded view of society. I consider myself to be a really tolerant person; I’m able to see past the differences in the world and focus more on the many ways in which we’re similar.

Do you have a favorite Phantom Regiment memory? Please share! There are too many to list, but let me try to recount some of my favorites… Touring the Western US in 2007 and 2008, the amazing venues (The Rose Bowl, Mile High Stadium, etc.), the corps’ incredible bond in 2008 (‘Think 1’), late-night bus rides dying of laughter and recording videos on my digital camera (not my smart phone), free days in awesome cities (San Antonio, Washington DC, etc.), bowling night (and the morning-after when the entire corps was woken up by Rick V. to start running), the color guard’s spin club every morning BEFORE breakfast, the CRAZY windy show in New Mexico when the corps didn’t wear helmets, doing bird make-up every day on the bus in 2007, 3-hour warm-ups before shows (aka, another rehearsal block), and so many more! I also loved the rush of filling a hole in 2009 and having to learn the show in just a few days!

How have you stayed involved with Phantom Regiment over the years? I typically donate to the dues of a color guard member each year.

What is your favorite Phantom Regiment show? Why? I went to the Indianapolis Regional in 2005 and fell head-over-heels in love with Phantom Regiment and ‘Rhapsody’. That color guard was so amazing; the umbrellas, the orange pants, and those feather headdresses! It’s still one of my favorite drum corps shows of all time.

Michael and Amy (Braun) Tomsa, after 2007 Finals in Pasadena

As a performer, 2007 (‘On Air’) was my favorite season, because the color guard was insanely talented and the show was stupid hard. I’ve never been a part of a more talented drum corps color guard. That was the season I had some of the most growth as a performer and really learned to push myself. And who remembers the crazy wind sprints the hornline used to do while playing Firebird?!

We look forward to sharing more stories with you this year! Who do you want to know more about? Let us know here!