In celebration of 60 years of great drum corps in Rockford, we are bringing you into the lives of the members of Phantom Regiment, highlighting alumni from every decade. This month, we are focusing on a few colorguard members who might not fit the “traditional” Phantomette mold….

Give us a quick run down of your life outside of drum corps:  I have a two year old son named Henry who is obsessed with Drum Corps, namely Phantom Regiment (2008 is his personal favourite and he screams “I am Spartacus” most mornings when he gets out of bed). My husband (Joe Huls) and I met while marching Phantom Regiment together in 03/04. I am a Licensed Professional Counselor and hold a BSc in Psychology from Kennesaw State University MSc in Mental Health and Psychological Therapies from Queen Mary University of London. 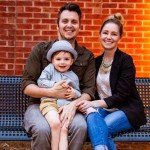 Do you see any life skills you learned in drum corps applied in your daily life now? How has your drum corps experience benefitted you? I feel drum corps has lead me to have higher expectations for myself in terms of work ethic, attention to detail, and perseverance. I multi-task and manage several projects at one time and I feel much of this comes down to time management–a skill I learnt in drum corps. I also enjoy teaching at both High School and Independent level, and I use the skills and teaching methods I was exposed to regularly to assist my students.

Do you have a favorite Phantom Regiment memory? Please share! SO MANY!
– Staying at the Flamingo hotel in Las Vegas when the DCI show was cancelled and the entire corps were hanging in the swimming pool.
– Tour of Champions 2004. Cruising the different food trucks to see who had the best breakfasts.
-Pat Seidling encouraging the entire corps to beat me with pillows on July 4 (For those that don’t know her, Becky is English 🙂 )
– Directing the colorguard away from the bear sighting in 2009

– Laughing every day with the 2012/2014 guard staff. Every day it was a pleasure to work alongside them.

Why do you think it is important to donate to Phantom Regiment? They have the ability to change the course and direction of young peoples’ lives. Without Phantom I would never have met my husband, had my son, or have the friends and life I do today (I probably wouldn’t even live in the same country). The person I am today and the success I experience are largely in part due to the skills I learnt from this amazing organization. 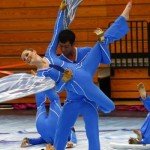 Rebecca performing with the Phantom Regiment Winterguard in 2008

What is your favorite Phantom Regiment show? Why? I have several…2003 because I was in it, 2007 because it is aesthetically gorgeous, and 2012 because it brings back great memories of teaching alongside my closest friends.

We look forward to sharing more stories with you this year! Who do you want to know more about? Let us know here!