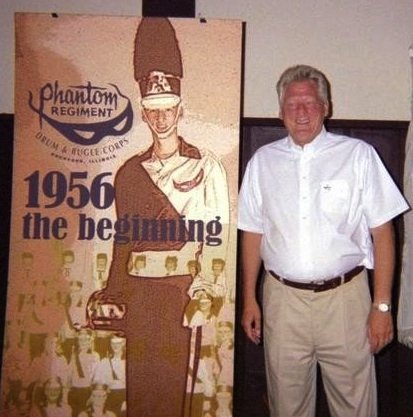 Phantom Regiment legend Dr. Dan Richardson has been selected for induction into the Drum Corps International Hall of Fame.

The DCI Hall of Fame honors individuals who have left an indelible impression on the drum corps activity. The announcement was made April 20.

“I am humbled and grateful to have been voted into the Drum Corps International Hall of Fame. This is a huge honor and a huge highlight in my life”, says Richardson. He becomes the fifth person with Phantom Regiment ties to join this prestigious society. Jim Wren and John Brazale were inducted in 1994, Michael Cesario in 1996 and Freddy Martin in 2006.

Dr. Dan, as he’s known by everyone in the Regiment family, began his association with Phantom Regiment as a charter member of the corps from 1956 to 1964, and his involvement continues to this day. His tenure on staff began in 1972 when he became program coordinator, a position he held until 1992 with only 2 years off during that time.

Wren wrote in his nominating letter that he credits Richardson with being one of the early individuals to recognize the need for someone to coordinate the work of the individual caption heads.

Though Richardson spent nearly 20 years as program coordinator, he has had myriad roles and titles in the organization: corps director, medical director, board member, adviser and donor. Outside of Phantom Regiment, he is a well-respected medical professor and Assistant Dean at National University of Health Sciences in Lombard, Ill., where he serves as chair of the department of nutrition and the department of undergraduate studies. He is also a professor of nutrition and dean of students at the National College of Naprapathy in Chicago.

Richardson, a Rockford native, has said that much of his success is the result of the hard work and life lessons he learned when he was a member of Phantom Regiment. Fifty years after being a member, Richardson s leadership and mentorship has helped those involved with the Regiment to realize how they can be successful with the lessons learned in drum corps.

In his letter of support, Michigan State University associate director of bands John Madden recalls first-hand the desire and enthusiasm that Richardson had for the Regiment and its members.

Dan Richardson displayed this loyalty through his caring nature, his personal financial contributions, his relentless standards of excellence, his ability to motivate and inspire, and his instinct to care for and comfort each and every member of the Phantom Regiment.

That recognizable Dr. Dan spirit has also been seen by many outside of Phantom Regiment.

Current Phantom Regiment executive director Rick Valenzuela first came into contact with Richardson when he was a first-year director of the Santa Clara Vanguard in 2000. Rick stated in his supporting letter that Richardson s words of encouragement and enthusiasm for the drum corps activity were inspiring and motivating.

Valenzuela went on to say his influence still provides a positive environment and experience for the young people that come through our doors.

Richardson s presence is not only felt within the Regiment organization but throughout the activity. Loves Park Mayor Darryl Lindberg, a Phantom Regiment alumnus, said in his letter of support, This activity would not be what it is today without the presence of the Phantom Regiment, of which Dr. Dan Richardson has influenced, steered and been involved since its inception.

Richardson currently sits on the board of directors of Phantom Regiment in addition to being a mentor and adviser for many staff members over the past decade. He is also an associate board member of several hospitals and universities, and a guest lecturer and adjunct professor at Florida State University. He is a member of the Federation of the Society of Experimental Biologists, the American Botanical Counsel, the American Association of Nutrition Consultants and the DARE Program for the City of Chicago. He also is a member of the American Chiropractic Association and vice president of the alumni association of the National College of Naprapathic Medicine.

He received his bachelor’s, master’s and doctorate degrees in Pharmacology and Pharmocognosy from Loyola University’s Stritch School of Medicine. He is an expert in nutrition and botanical medicine, giving seminars around the world to all areas of the healthcare profession. He is a certified nutrition consultant and has had advanced training in phytochemicals and sports medicine nutrition.

Richardson is the author of several research papers

on nutrition and pharmacology and is a contributing author of several textbooks.

With all the accolades that Richardson has received over the years – within the drum corps activity as well as in his professional career – he demonstrates humility and unmatched leadership qualities. This was noted in a letter of support from longtime Santa Clara Vanguard staff member and a 2010 Phantom Regiment designer, Myron Rosander.

In a world dominated by self-importance, titles, statistics and inflamed opinion,” Rosander wrote, “it is Dr. Dan s humble presence to the staff and students which makes him the invaluable resource that he is. These virtues are often difficult to measure, yet they are the fundamental ground zero of what makes our beloved activity so outstanding.

The Phantom Regiment organization is very proud of the work that Dr. Dan has done over the years. A man that has meant, and continues to mean, so much to the organization, so dearly deserves this recognition. We are lucky to have a charter member so involved and influential as Dr. Dan Richardson.

“I owe everything I have achieved in my life to two important groups”, says Richardson, “my loving family and the Phantom Regiment Drum and Bugle Corps. The Corps is responsible for my professional success. It has had a huge impact on my life and it will take a long time for me to repay the benefits I have realized.”