A native of Houston Texas, Brandon holds a B.M. in Music Education from Texas State University  San Marcos (2004) as well as his M.M. in Music Performance-Percussion from Northern Illinois University (2006).

Mr. Estes extensive drum corps experience includes membership with the Pioneer (1998  00), as well as the Madison Scouts Drum and Bugle Corps (2001  02). He also served as Co-Arranger and Percussion Caption Head of the Blue Stars (2005) and has been on staff with the Madison Scouts. Brandon currently serves as Director and a performing member of the Chicago Bears Drumline and is a founding member of the Chicago Bulls Stampede Drumline.

As an orchestral musician, Mr. Estes has performed with the Austin Symphony Orchestra, the Chicago Sinfonietta, the Elmhurst Symphony of Elmhurst, Illinois as well as the Hong Kong Philharmonic Orchestra in Tsim Sha Tsui, Kowloon, Hong Kong.

Brandon currently resides in the Chicago suburbs with his wife and anxiously awaits the birth of his first child. He is very excited at the opportunity to work with the staff and members of the Phantom Regiment! 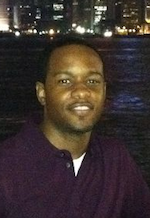