Glen Brough was elected to the Phantom Regiment Board of Directors in 2009.

He was assistant director of admissions at Michigan State University for many years and the visual coordinator of the MSU Spartan Marching Band from 1988-2018 (he was a member of the band or staff starting in 1975). He retired in August 2019.

Glen first became involved with Phantom Regiment as a member of the visual staff in 1993 and then as a donor. He is a part of the board’s development committee.

He was a drum major at Michigan State for four years and has written more than 100 high school marching band shows in the past 35 years.

Originally from Grosse Ile, Mich., Glen has a bachelor of science degree from Seton Hall University (1981) and a master of arts degree from Michigan State (1986).

He is married and lives in Bath, Mich. 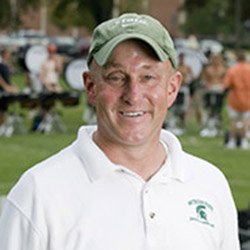