A 2013 graduate of the Music Education Program at the University of Illinois in Champaign-Urbana, Jesse Backes has been an active member of the percussion world for more than a decade as a teacher and performer.

While in the percussion studio at the University of Illinois, Jesse played in ensembles ranging from the top Symphony Orchestra and Concert Bands to Percussion Ensemble, Latin Jazz, and Steel Band. These experiences coupled with his private studies with professors William Moersch and Ricardo Flores provided him with a great foundation with which to dive head first into the real world.

Jesse has worked with groups all over the Chicago area as a freelance percussion instructor teaching marching percussion, concert percussion ensemble, steel band, and private lessons. He works currently with Metea Valley H.S. from Aurora, IL, Batavia H.S. from Batavia, IL, and Marian Catholic H.S. from Chicago Heights, IL where he is the battery technician and on-staff private lesson instructor. He spends his weekends with Green Thunder Percussion where he has been a snare technician since 2011.

Jesse is very excited to be joining the percussion and visual staffs for the 2014 Phantom Regiment. His main role as battery visual technician will be supplemented by musical work with each section of the battery. 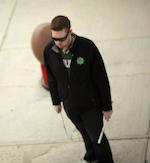