Sheldon Apo is originally from Bellevue, Nebraska and currently lives in Dayton, Ohio. Sheldon graduated from Bellevue East High School where he was involved in everything musical including playing the alto saxophone for seven years. He decided to start his colorguard career during his senior year of high school and has continued teaching ever since.

Sheldon’s performing career includes the 2001 and 2002 DCI World Champion, The Cavaliers Drum and Bugle Corps. Sheldon continued to perform with the 2003, 2004, and 2005 Pride of Cincinnati Cast when they were named the 2005 WGI Independent World Class Champion.

Sheldon is the Guard Director for Bellbrook High School in Bellbrook, OH and currently has three competitive guard programs in the Bellbrook – Sugarcreek Local School District which include an elementary and Middle School program. He has been with the program for 16 years and has been the director for 8 years. His accomplishments at Bellbrook include 2004 2A BOA Class Champion, 2013 1A BOA Class Champion and the 2013 WGI Scholastic A Class Champion. In 2015, Bellbrook HS was awarded the WGI Scholastic Open Class Silver medal. The Bellbrook World Guard was a 2016 and 2018 WGI Semi-Finalist and a 2017 WGI World Class Finalist.

Sheldon was part of the inaugural season for Zydeco in 2007 and was a choreographer for them from 2007-2014. From 2010-2014, Sheldon taught the 7-time DCI World Champion, The Cavaliers, where he served as a technician, equipment choreographer, and the 2011-2012 Color Guard Caption head. From 2015-2017, he taught and choreographed for perennial DCI Finalist, The Crossmen. Sheldon attended The University of Nebraska at Omaha and received his Bachelors in Mathematics with a concentration in Computer Engineering.

When he is not teaching color guard, he loves and cares for his beautiful dog, Josie! 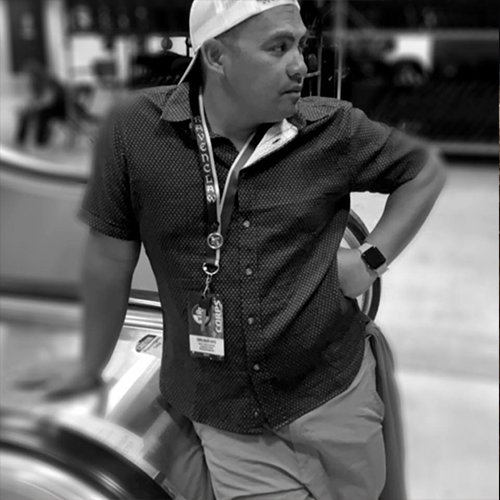