Stephen was born and raised in Cleveland, Tennessee where he attended Cleveland High School. He played every marching percussion instrument while being in the Cleveland High School Marching Band under the instruction of Jim Burton, Phantom Regiment Alum Zach Riggins, David Giddens, and Matt Grimes. Stephen has an extensive indoor marching career starting from Cleveland High School Indoor Drumline in 2005 and Chattanooga Independent in 2006, both finalist years. During his junior year in 2006 he auditioned for the world class indoor marching percussion ensemble Music City Mystique. As the youngest member of the group, 15 years old from the start, he fell in love with it and continued to march in the quad line for the next seven years (2007-2013). He was section leader for the last five years and earned six WGI medals including one World Championship with the group.

Along with his WGI career Stephen also marched three years of drum corps under percussion caption head Shane Gwaltney, starting with Spirit Drum and Bugle Corps (2009) in a six-man quadline. After taking a summer off he went on to march with Phantom Regiment for the 2011 and 2012 seasons as section leader, aging out with a bronze medal. 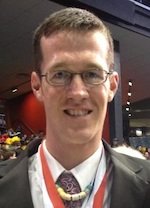