Drum and Bugle Corps is an original American art form 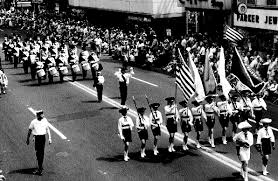 The first two corps in the area, the VFW Post 342 and the American Legion Post 62, were comprised of veterans who were male and members of those particular posts. There have been many drum corps in the Rockford area since that time. By far the most prominent has been the Phantom Regiment.

Formed in 1956 by a group of VFW 342 members who wanted to see a competitive drum corps, it was named the Rockford Rangers, with an all-girl color guard to be called the Rangerettes.

Many of the members did not feel the name “Rangers” was appropriate for their corps. Some of the members had been listening to some Stetson D. Richmond records, and were impressed with a tune the Syracuse Brigadiers had played entitled “The Phantom Regiment.” Thus, before the corps had made any public appearances, the corps name had been changed to the Phantom Regiment and the all-girl color guard was called the Phantomettes. 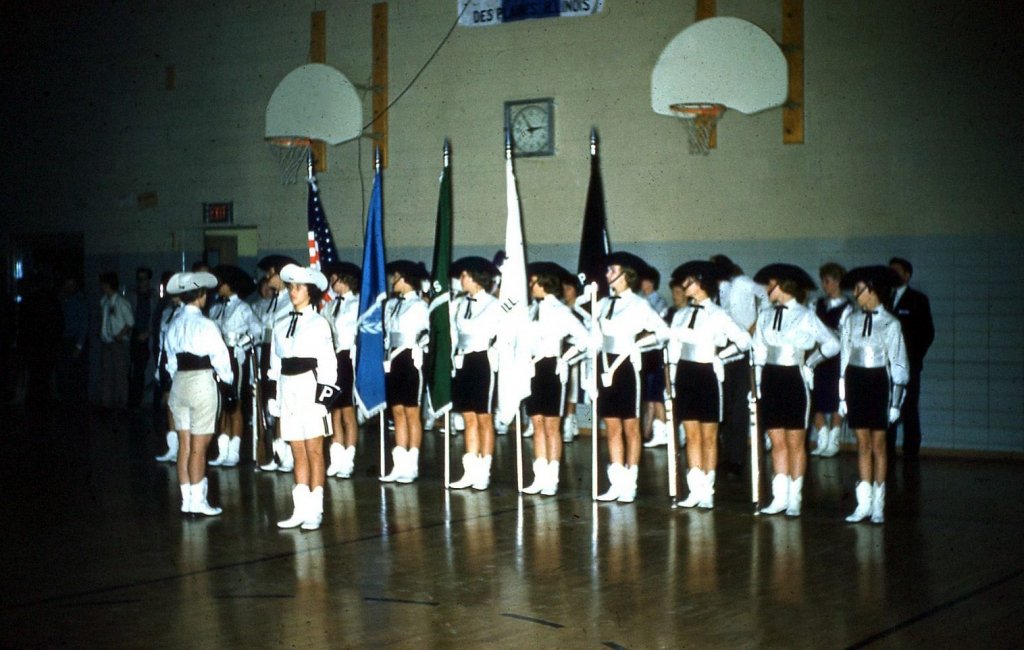 While the corps was in its development stages, a great emphasis was put on the competition guard aspect of the activity. Almost overnight, the Phantomettes became very successful on their own. An all-male comp guard made up of members of the Regiment horn line, called the Raiders, also had a brief success story.

The drum and bugle corps itself, however, struggled competitively. In 1962, the corps bought a set of high quality bugles from the Commonwealth Edison Drum and Bugle Corps. With quality instruments and the addition of a new brass arranger, the corps began to improve.

Also in 1962, the original Phantom Regiment Cadets were formed, using the old set of bugles. In 1963, the Regiment fielded an all-male corps, including the color guard, with mixed results. The all-girl guard returned in 1964 and, with the help of a very successful recruiting drive, the Phantom Regiment, sporting a new set of military uniforms, had its most successful year.

But, just as is looked like the Regiment was on its way to becoming a championship-caliber corps, a fire in the corps hall took away the corps home, along with the uniforms and the instruments. The Phantom Regiment tried to field a corps in 1965, but eventually was forced to cancel the season due to lack of finances.

A new Board of Directors, comprised of former members and staff of the original corps, reorganized and incorporated the Phantom Regiment on Sept. 11, 1967, with the following mission statement:

“To organize, maintain, and operate a musical marching unit, band, color guard, and related activities, and in general, promote and encourage drum and bugle corps activities, parades, concerts, contests, and to further the musical talents and interests of young persons.”

The original Board of Directors could not have imagined that 30 years later their corps would have a budget of well over half a million dollars, nor could they have imagined that the Phantom Regiment would one day be competing for the drum and bugle corps world championship.

The reorganized Phantom Regiment began its first season in three years with a small corps that signed the first roster Jan. 10, 1968. There were 28 charter members.

The first season for the corps included many parades and a few contests. The corps uniform included black pants with a red wind breaker. There was a black and white vertical stripe on the left side of the wind breaker. The guard wore the same wind breaker with black Bermuda shorts and an Aussie style hat. The equipment truck was a red step up van and was the only vehicle owned by the corps.

As the years passed, the number of contests grew, the distance covered in the tour increased, and the Phantom Regiment began to creep up the ladder of drum corps.

New in 1970 was a cadet-style uniform, including black pants with a white stripe, a jacket with a diagonal sash of red dividing the black right side and the white left side. On the sleeve of each jacket there was a chevron. White bucks were worn on the feet and new shakos with 12-inch plumes decorated the head gear. The guard wore identical uniforms with the exception of Bermuda shorts and white 10-inch high boots.

During the fall and winter of the 1974 season individual marching and brass lessons were given to each member of the corps which had grown to the maximum 128 members. The Phantom Regiment made finals at the Drum Corps International World Championships for the first time in1974, finishing eighth in prelims and 11th in finals.

The years between 1967 and 1974 were some of the most exciting in the history of the corps. They were the formative years and defined the style of the Phantom Regiment. Those years saw the growth of the young nucleus of members to a mature world-class drum corps.

In the fall of 1974, a new uniform was conceived for the 1975 corps. It was a uniform that would give the Phantom Regiment its identity. Long white jackets with a black sash, a two-colored cape with red on the inside and black on the outside, black pants, and the one element that remains today: the pith helmet.

The remainder of the 1970s would be years of rapid advancement for the Regiment as the corps matured to become a contender for the DCI crown.

During the early 1980s, the Regiment produced some of the most innovative programs ever to grace the field of competition. The corps was well ahead of its time with the 1981 and 1982 productions of the ballet Spartacus, a project two years in the making. Critically acclaimed and loved by audiences everywhere, the Regiment fame grew throughout the world.

The corps that is recognized today began in 1987.

After a difficult 10th-place finish in 1986, the corps took a fresh new approach. The corps made a dramatic change inspired by Michael Cesario, with new all-white uniforms more closely resembling costumes. This new look and approach led to three years of dramatic improvement, culminating in 1989 with a second-place finish and the second highest score ever, 98.4.

The 1990s have proved to be a time of continued success and evolution, when in 1995 the uniforms changed again. The same style was used, however the color became all black.

In 1996, the goal and dream of everyone involved with the organization over the past 30 years came true. The Phantom Regiment tied the Blue Devils of Concord, Calif., for its first DCI World Championship.

The corps took on a new look in 2000 with another Michael Cesario-inspired uniform. The all-black was replaced by tan jackets and white pants with a red baldric. The traditional Phantom Regiment helmets remained.

Now into the 21st century, the Phantom Regiment is ready to continue its past success and strive for future goals.

Volunteer of the Year

See Us In Action

Learn More About Us